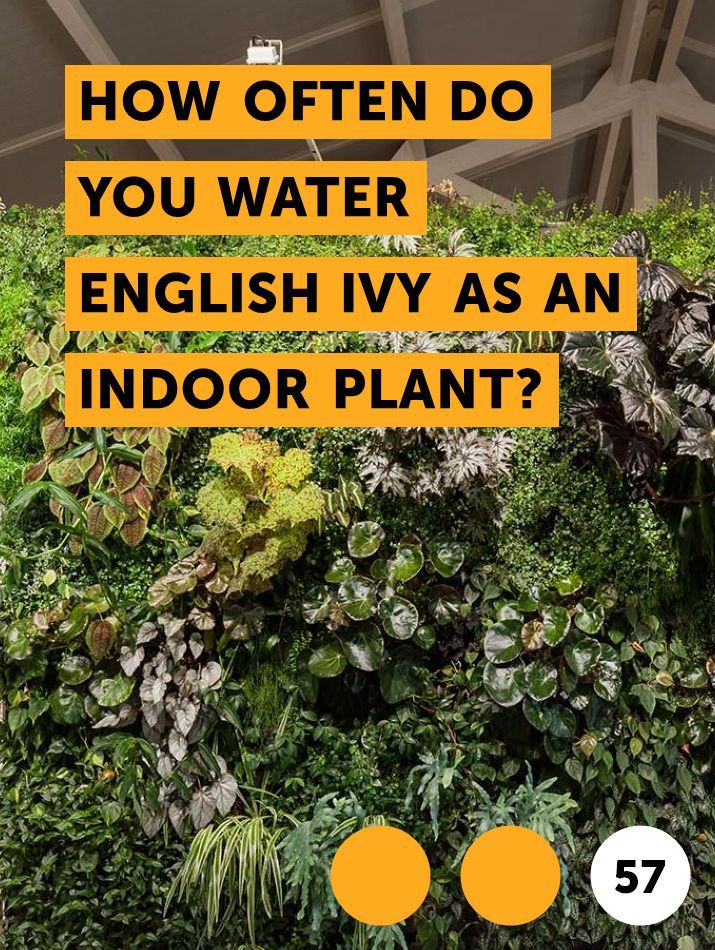 Ivy is a fast-growing, climbing evergreen plant that can reach heights of up to 20 feet. It has dark green, glossy leaves and small white flowers that bloom in the spring. Ivy is a popular choice for covering walls and trellises, and it makes an excellent groundcover.

While ivy is relatively drought-tolerant, it does need regular watering to stay healthy and look its best. How often you water ivy depends on the plant’s size, location, and time of year.

Ivy is a popular houseplant because it is easy to care for and looks great with minimal effort. However, even easy-care plants need some attention when it comes to watering. So, how often should you water your ivy?

Ideally, you should water your ivy when the top inch of soil is dry. This can vary depending on the type of potting mix you use, the size of your pot, and the climate you live in. For example, if you live in a hot and dry climate, your ivy will likely need to be watered more often than if you live in a cooler and wetter climate.

If you’re not sure whether or not your ivy needs water, stick your finger into the soil near the plant. If it feels dry to the touch, it’s time to water. Also, take a look at the leaves of your ivy plant.

If they are beginning to droop or look wilted, that’s another sign that it’s time to give your plant a drink. When watering Ivy make sure you give it a good soaking so that moisture penetrates all the way down to the roots where it’s needed most. Allow any excess water to drain away before putting Ivy back in its spot; soggy roots are prone to rot which can kill your plant quickly.

How Often Should I Water My Ivy?

Ivy is a popular houseplant because it is easy to care for and thrives in a variety of conditions. However, one of the most common questions about caring for ivy is how often to water it. The answer to this question depends on a few factors, including the type of ivy you have, the potting mix it is grown in, and the level of humidity in your home.

If you have a vining type of ivy, such as English ivy (Hedera helix), then it will need to be watered more frequently than a bushier type, such as Algerian ivy (Hedera canariensis). This is because vining ivies have shallower root systems that dry out more quickly. In general, Ivies should be watered once or twice a week during the growing season (spring and summer), and every 10-14 days during the dormant season (fall and winter).

Soil-based mixes should be allowed to dry out slightly between watering so that the roots don’t become waterlogged. On the other hand, soilless mixes dry out quicker, so they will need to be watered more often. Finally, the level of humidity in your home also plays a role in how often you need to water Ivy.

If your home is on the drier side (under 40% relative humidity), then Ivy will need to be watered more frequently than if your home has higher humidity levels (over 60% relative humidity). This is because Ivy comes from humid environments and its leaves will start to brown and curl if they don’t get enough moisture from the air around them.

You May Also Like:  How to Harvest Sunflower Seeds?

Do Ivy Plants Need a Lot of Water?

No, ivy plants do not need a lot of water. In fact, they are quite drought tolerant once established. However, during the establishment period (first few months after planting), they will need regular watering to get them through until they are fully rooted in and can start to access moisture from the soil on their own.

Once established, you can cut back on watering frequency but make sure to give them a good drink every now and then during extended periods of hot, dry weather.

Ivy plants are a type of evergreen that can range in size from small groundcover to large shrubs or vines. They are popular for their dense foliage which can provide year-round interest in the garden. While ivy plants do need some sunlight to thrive, they are also tolerant of shade and can even be grown indoors.

When it comes to choosing a location for your ivy plant, somewhere that gets partial sun or dappled shade is ideal. If you live in an area with hot summers, it’s best to give your ivy plant some afternoon shade to protect it from the harsh afternoon sun. Indoor ivy plants will do best near a bright window but out of direct sunlight.

If you find that your ivy plant isn’t getting enough light, you may notice the leaves start to turn yellow or pale green. Ivy plants that aren’t getting enough light will also tend to grow leggy and have fewer leaves than those that are getting the right amount of light. If you think your ivy plant needs more light, try moving it to a brighter spot or adding some artificial lighting such as grow lights.

Can You Over Water Ivy?

If you believe that you can never overwater your plants, think again. While it’s true that most plants need a good soaking now and then, too much water can be just as harmful as too little. When it comes to watering, it’s all about finding that happy medium.

And when it comes to watering ivy, err on the side of caution. Ivy is a notoriously thirsty plant, and will take all the water you give it – and then some. So if you’re wondering whether or not you can overwater your ivy, the answer is yes… but only if you’re really not careful.

Here are a few things to keep in mind when watering ivy: 1) Water deeply, but not too often. Ivy likes its roots nice and moist, so aim to water deeply once or twice a week (depending on weather conditions).

It encourages deep root growth (which means a healthier plant overall). So don’t be afraid to let the top inch or so of soil dry out before watering again.

English Ivy Watering – Schedule (When And How Often)

Ivy is a versatile houseplant that can brighten up any indoor space. But how often should you water ivy indoors? Here are a few things to keep in mind when watering your indoor ivy plants:

Ivy likes to be kept moist, but not soggy. Water your ivy plant whenever the top inch or two of soil feels dry to the touch. Be sure to empty any drainage tray after watering so that your ivy plant doesn’t sit in water.

If you’re unsure how often to water, err on the side of too little rather than too much. Overwatering can lead to root rot, which can be fatal for your ivy plant.

You May Also Like:  How Long to Soak Dahlia Tubers before Planting?

How Often to Water Ivy Outdoors

If you’re growing ivy outdoors, you’ll need to water it regularly to keep it healthy. But how often should you water it? The answer depends on a few factors, including the type of ivy you’re growing, the weather conditions, and the soil.

In general, though, most ivies need about 1-2 inches of water per week. If you’re not sure how much water your ivy needs, check the soil before watering. If it’s dry several inches down, it’s time to give the plant a good drink.

Be careful not to over-water Ivy, though, as this can lead to problems like root rot. When in doubt, err on the side of too little water rather than too much. Your Ivy will be just fine if it doesn’t get watered for a day or two – but if you overwater it consistently, that could be fatal.

How Much Water Does an Ivy Plant Need

Ivy is a trailing or climbing evergreen plant that is typically found in shady areas. While the amount of water an ivy plant needs will depend on several factors, such as the type of ivy, the climate, and whether it is potted or in the ground, a general rule of thumb is to water your ivy plant when the soil is dry to the touch. If you live in an area with hot summers, your ivy plant will need more water than if you live in a cooler climate.

Additionally, if your ivy plant is in a pot, it will need more water than if it were planted in the ground. Be sure to check the soil regularly and adjust your watering schedule accordingly. Over-watering can be just as harmful to an ivy plant as under-watering, so be sure not to give it too much water.

If you see that the leaves are drooping or turning yellow, this is a sign that your ivy plant needs less water. Overall, Ivy plants are relatively low maintenance and easy to care for. With proper watering, they can thrive indoors or outdoors!

How Often to Water Devil’S Ivy

Devil’s ivy, also known as pothos or Epipremnum aureum, is a fast-growing, easy-to-care-for houseplant. One of the most popular indoor plants, devil’s ivy can grow up to 10 feet long and is often seen trailing from hanging baskets or climbing up trellises. While it is tolerant of neglect, devil’s ivy will thrive with regular watering and fertilization.

Here are some guidelines for watering your devil’s ivy: Water when the top inch of soil feels dry. Devil’s ivy is drought tolerant, so you don’t need to worry about over-watering.

However, if the plant is allowed to dry out too much, it will start to drop its leaves. Water with lukewarm water to avoid shocking the plant. Allow the excess water to drain away and don’t leave the plant sitting in water.

Fertilize monthly during the growing season (spring and summer) with a balanced liquid fertilizer diluted by half. During fall and winter, fertilize every other month.

Ivy is a beautiful, versatile plant that can add a touch of elegance to any home. But how often should you water ivy? The answer may surprise you – ivy doesn’t need as much water as you might think.

In fact, overwatering is one of the most common problems with this plant. Here are some general guidelines for watering ivy: * during the growing season (spring and summer), water when the soil feels dry to the touch.

Be sure to water deeply, so that the water reaches the roots. * during the dormant season (winter), reduce watering somewhat, but don’t let the soil dry out completely. Ivy can tolerate some drought, but too much stress can lead to leaf drop.

* if your ivy is in a pot, be sure to check it more frequently, as pots tend to dry out more quickly than garden beds. And always use a well-draining potting mix to help prevent root rot. Following these simple tips will help keep your ivy healthy and looking its best.