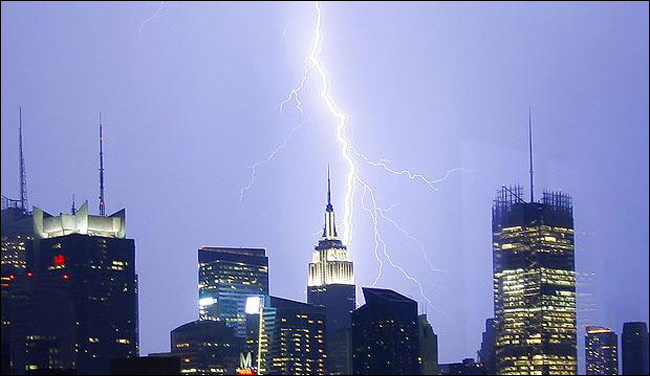 When a thunderstorm forms, the air inside the storm becomes electrically charged. The area of the storm where the charges are most concentrated is called the “charge center.” The charge center is usually near the bottom of the thunderstorm cloud.

When a thunderstorm forms, the air around the storm becomes charged with electricity. This happens because the warm air rising from the ground carries water vapor with it. The water vapor condenses and forms tiny droplets, which are pulled up into the thunderstorm by updrafts of air.

As these droplets rise, they collide and create larger drops of water. The large drops of water fall back down to the ground, picking up electrons from the atmosphere as they fall. This makes them negatively charged.

The positive charges are carried up by convection currents, while the negative charges are left behind in this region. Lightning is created when these opposite charges come together and discharge their energy in a flash of light!

When the air around a thunderstorm becomes too full of static electricity, one or more giant sparks can jump from the cloud to the ground. These sparks are called lightning. Most of the time, we see lightning as a bright flash in the sky during a thunderstorm.

1. Forked Lightning Forked lightning is probably the most iconic type of lightning. It gets its name from its forked shape which looks like a jagged bolt of electricity shooting down from the sky.

Forked lightning is created when there is an imbalance in electrical charges within the thundercloud. As negative charges build up in the bottom part of the cloud, they create an intense electric field. This field is so strong that it can cause positive charges in the upper part of the cloud to be pulled down towards the ground.

When these opposite charges meet, they create a giant spark of electricity – aka forked lightning! 2. Sheet Lightning Sheet lightning gets its name from its appearance – it looks like a sheet or curtain of light stretching across the sky during a thunderstorm.

Sheet lightning occurs when large areas within a thundercloud become electrically charged and discharge all at once. While sheet lightning may not be as flashy as other types of lighting, it can actually be quite dangerous because it often precedes hazardous weather conditions like tornadoes and hailstorms. 3 .

Ball Lightning Ball lighting is one of the most mysterious types of lighting because it’s still not fully understood by scientists. Ball lighting appears as glowing orbs that float through the air during thunderstorms (sometimes even entering homes through open windows!). These balls typically range in size from just a few centimeters to about 1 meter in diameter and usually last for just a few seconds before disappearing into thin air again.

You May Also Like:  How to Test Dryer Thermal Fuse?

Lightning prefers to strike objects that are tall and pointy, so it’s no surprise that churches and skyscrapers are often struck. Houses usually don’t fit this description, but they can become “lightning magnets” if they’re the tallest object in the area or if they have metal roofs. Some scientists believe that thunderstorms generate electrical fields that cause charged particles to build up on the ground.

If there’s an object nearby that can act as a conductor, like a metal roof or a flagpole, these particles will flow towards it and create an electrical potential difference. This potential difference can cause an electrical discharge, which we know as lightning. So if you want to avoid getting hit by lightning, it might be best to avoid being the tallest thing around and steer clear of anything made of metal!

Most people believe that lightning is attracted to objects that are tall, pointy, and made of metal. However, this isn’t always the case. Lightning can strike any object that is in its path, regardless of whether it’s made of metal or not.

The colour of an object doesn’t play a role in whether or not it will be struck by lightning.

Where Does Lightning Strike the Most?

This means that locations in the central plains are more likely to be struck by lightning than locations in Florida.

The Science of Lightning | National Geographic

What Attracts Lightning in Minecraft

In Minecraft, there are several things that can attract lightning. These include anything that is made of metal, such as swords and armor, as well as any player-made structures that contain metal blocks. If a thunderstorm is happening nearby, these objects will be struck by lightning frequently.

What Attracts Lightning to a House

As thunderstorms move across the landscape, they often produce spectacular displays of lightning. But what is it that causes a bolt of lightning to strike a particular house? Is there something about the structure that makes it more attractive to lightning than other objects in the area?

It turns out that there are several factors that can make a house more likely to be struck by lightning. The first is height. A taller structure will present a larger target for a bolt of lightning to hit.

Additionally, any metal on the exterior of the house can act as a conductor for electricity, providing an easy path for the current to flow into the ground. Finally, if there are trees or other tall objects near the house, they can provide a pathway for the current to travel from the cloud to the ground, increasing the chances that your home will be in its path. While there is no guaranteed way to prevent your home from being struck by lightning, understanding these factors can help you take steps to reduce your risk.

If possible, avoid building in areas where thunderstorms are common and consider installing Lightning Protection Systems (LPS) which can help deflect strikes away from your property.

You May Also Like:  How Much Does Pine Weigh?

What Attracts Lightning to the Ground

Lightning is one of the most awe-inspiring and dangerous natural phenomena on Earth. It is also one of the least understood. Scientists are still trying to piece together the puzzle of how and why lightning happens.

One of the key questions they are trying to answer is: what attracts lightning to the ground? There are a few theories about what might cause this attraction. One possibility is that it has something to do with the electrical charges in the atmosphere.

Lightning is thought to happen when these charges become imbalanced, with more positive charges building up in one area than negative ones. This can create an electrical field around objects like trees or buildings, which may attract a lightning bolt looking for a path to discharge its energy. Another theory suggests that particles of dust or water vapor in the air might play a role in attracting lightning.

These particles can act as conductors for electricity, providing a pathway for lightning to follow as it seeks out its target. Whatever the reason, there’s no doubt that Lightning is drawn to certain objects on Earth’s surface – often with deadly consequences. That’s why it’s so important to be aware of your surroundings during thunderstorms and take steps to protect yourself from this powerful force of nature.

Lightning is one of the most fascinating—and dangerous—phenomena in nature. Though we often take it for granted, water is a key ingredient in the formation of lightning. Water vapor is an excellent conductor of electricity, and it plays an important role in the development of thunderstorms.

As warm air rises and cools, water vapor condenses into tiny droplets. These droplets eventually form clouds, which can grow to be quite large. When these clouds become saturated with water, they can no longer hold all of the moisture.

Some of the water droplets begin to fall as rain or hail. As they fall, they collide with other particles in the cloud (such as dust or ice). This collision creates an electrical charge.

As you probably know, thunderstorms are often accompanied by lightning. But have you ever wondered what actually attracts lightning to a particular spot? It turns out that there are several factors that can contribute.

For one thing, thunderstorms tend to form in areas where there is a lot of updraft, or rising air. This updraft carries water droplets high into the atmosphere where they eventually freeze and form ice crystals. These ice crystals then fall back down towards the earth’s surface.

As they fall, they collide with other ice crystals and become charged with static electricity. Eventually, these charged particles build up enough energy to create a lightning bolt. Another factor that can attract lightning is pointy objects.

Because the air around a pointy object is more ionized than the air around a flat object, it tends to be a better conductor of electricity. That’s why tall buildings and trees are often struck by lightning during a storm.