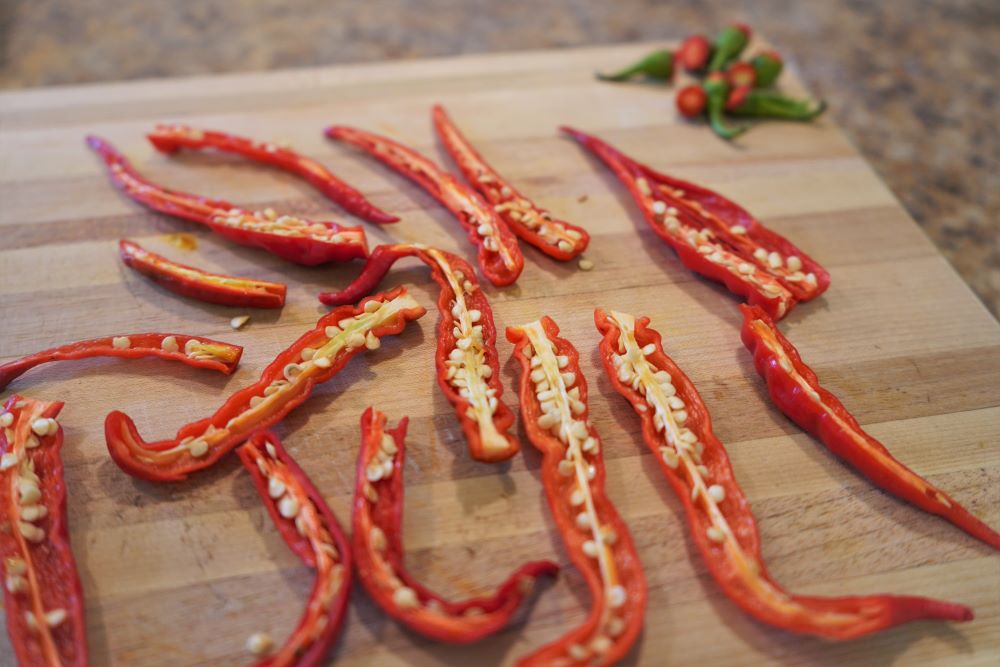 Drying cayenne peppers is a great way to preserve them for later use. There are two main methods for drying peppers: using a dehydrator or air-drying. Both methods are fairly simple and only require a few hours of time.

Dehydrators will produce the best results, but if you don’t have one, air-drying will still work well.

How to Dry Cayenne Peppers on a String

Next, make a small hole in the stem of each pepper and thread a piece of string through it. Tie the string to a clothespin or kitchen towel holder and hang it up in a well-ventilated area out of direct sunlight. Allow the peppers to dry for about 2 weeks, or until they are completely dried out.

Once they are dried, store the peppers in an airtight container in a cool, dark place. They will keep for several months this way.

How to Dry Cayenne Peppers in Oven

Cayenne peppers are a type of chili pepper that is typically used to add spice to dishes. They can be purchased fresh or dried, and when dried, they can last for up to a year. If you have fresh cayenne peppers and would like to dry them yourself, you can do so by using an oven.

To dry cayenne peppers in the oven, start by preheating the oven to its lowest setting, which is usually between 200-250 degrees Fahrenheit. Next, wash the peppers and slice them into thin strips. Spread the pepper strips out on a baking sheet lined with parchment paper and bake for 2-3 hours, or until they are completely dried out.

Once they are done drying, remove them from the oven and let them cool before storing in an airtight container. Drying cayenne peppers in the oven is a quick and easy way to preserve them for later use. By following these simple steps, you can enjoy the flavor of these fiery spices all year long!

You May Also Like:  Where is Water Filter on Keurig K-Classic?

How to Dry Cayenne Peppers Naturally

Drying cayenne peppers is a great way to preserve them for later use. Cayenne peppers can be dried in the sun, in an oven, or in a dehydrator. Sun drying is the most natural and cheapest method, but it takes the longest.

Start by washing your peppers and slicing them into thin strips. Spread them out on a clean towel or screen in a single layer and place them in direct sunlight. Check on them every few hours, flipping them over so that they dry evenly.

Depending on the weather, it could take anywhere from 2-7 days for your peppers to fully dry out. Oven drying is faster than sun drying, but it uses more energy. Preheat your oven to its lowest setting (around 200 degrees Fahrenheit) and line a baking sheet with parchment paper.

Place your pepper strips on the baking sheet, making sure that they are not touching each other. Bake for 2-3 hours, checking on them every hour or so to make sure they are not burning. When they are finished drying, they should be crisp and brittle.

Dehydrators are the quickest way to dry peppers, but they do require an initial investment of around $50-$100 depending on the model you choose. If you decide to go this route, simply wash your peppers and slice them into thin strips before placing them on the dehydrator trays.

How to Air Dry Cayenne Peppers

Here’s how to air dry cayenne peppers: 1. Start with fresh, ripe peppers. Wash them thoroughly and then slice them into thin strips.

2. Spread the pepper strips out on a clean towel or cheesecloth and allow them to air dry in a well-ventilated area. 3. Once the peppers are completely dried, store them in an airtight container in a cool, dark place. That’s all there is to it!

Drying your own cayenne peppers is a great way to keep them fresh for use throughout the year. Give it a try and see how much flavor they add to your favorite dishes.

What to Do With Dried Cayenne Peppers

If you enjoy cooking with cayenne peppers, then you may be wondering what to do with the dried peppers once they’ve been harvested. Here are a few ideas for using dried cayenne peppers: – Add them to homemade chili powder or other spice blends.

You May Also Like:  How to Use Lg Washing Machine?

How Long Does It Take to Air Dry Cayenne Peppers?

It can take up to three weeks for cayenne peppers to air dry. The time will depend on the humidity and temperature of your drying environment. If you live in a hot, dry climate, it will probably take less time.

If you live in a humid climate, it will probably take longer. You can speed up the process by using a dehydrator or oven set on the lowest setting with the door cracked open.

How Do I Dry Cayenne Peppers Without a Dehydrator?

If you’re looking to dry cayenne peppers without a dehydrator, there are a few methods you can use. One method is to place the peppers on a wire rack in an oven set to the lowest possible temperature. Another option is to string the peppers up and hang them in a well-ventilated area out of direct sunlight.

Whichever method you choose, it’s important to check on the peppers regularly and rotate them as needed to ensure even drying. Once the peppers are completely dried, they can be stored in an airtight container in a cool, dark place for up to 6 months.

Can You Dry Cayenne Peppers on the Plant?

Drying cayenne peppers on the plant is possible, but there are a few things to keep in mind. First, the plant should be healthy and free of pests or diseases. Second, the peppers should be mature when you harvest them for drying.

If they are not fully ripe, they will not dry properly. Finally, you’ll need to protect the peppers from birds and other animals while they are drying. To dry cayenne peppers on the plant, first cut off any dead or damaged leaves.

Then, cut the peppers from the stem, being careful not to damage the plant. Place the peppers on a clean surface in a well-ventilated area out of direct sunlight. Allow them to dry for several days or until they are wrinkled and dehydrated.

Store the dried peppers in an airtight container in a cool, dark place until you’re ready to use them.

Can You Dehydrate Cayenne Peppers Whole?

Yes, you can dehydrate cayenne peppers whole. The process is simple and only requires a few hours. First, slice the peppers in half lengthwise and remove the seeds.

Next, place the peppers on a dehydrator tray and set the temperature to between 125-145 degrees Fahrenheit. Dehydrate for 4-6 hours or until the peppers are dried and brittle. Store in an airtight container in a cool, dark place.

Cayenne peppers can be dried in a number of ways, including air drying, oven drying, or dehydrator drying. Air drying is the most common method and simply involves hanging the peppers in a dry, well-ventilated area for several weeks. Oven drying is a quicker method but requires more vigilance to prevent burning.

Dehydrator drying is the fastest method but also requires the use of an electric dehydrator.